Formula One fans are blasting the Miami Grand Prix as the ‘Fyre Festival’ of motor sports after forking out thousands for weekend tickets only to be met with a fake marina, ‘parking lot’ track and tacky fake ‘beach clubs’ filled with posing stars and influencers who know nothing about the sport.

The event drew tens of thousands of people to the city over the weekend with the lure of a luxury sports and world class hospitality.

But the Hard Rock Stadium left much to be desired with its expansive campus, long walks form the parking lot and confusing layout.

General admission to the grounds on Friday, the practice day, was $300. After that, single day tickets soared to $800 for the day. 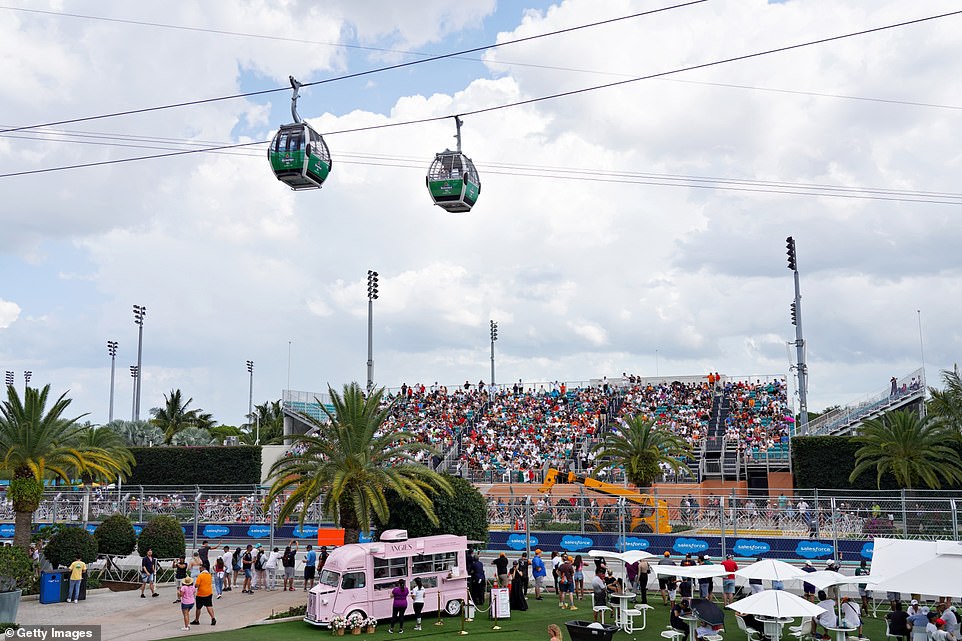 The cable car to the ‘VIP beach club’ in the middle of the track is shown on Sunday, the final day of the Miami Grand Prix 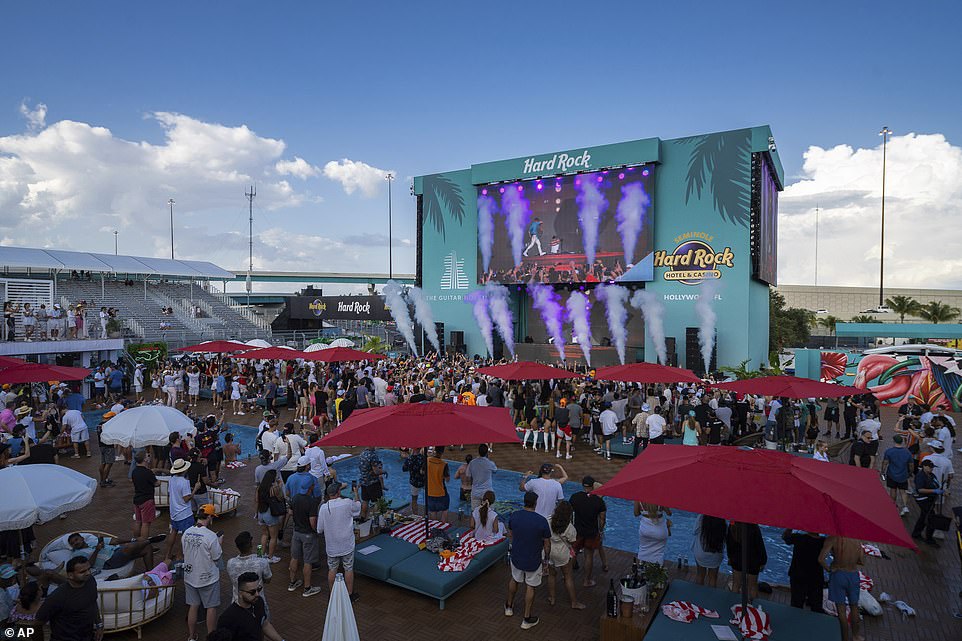 The Hard Rock ‘beach club’ on Sunday. Revelers watched The Chainsmokers, swam in one of the two pools and drank cocktails 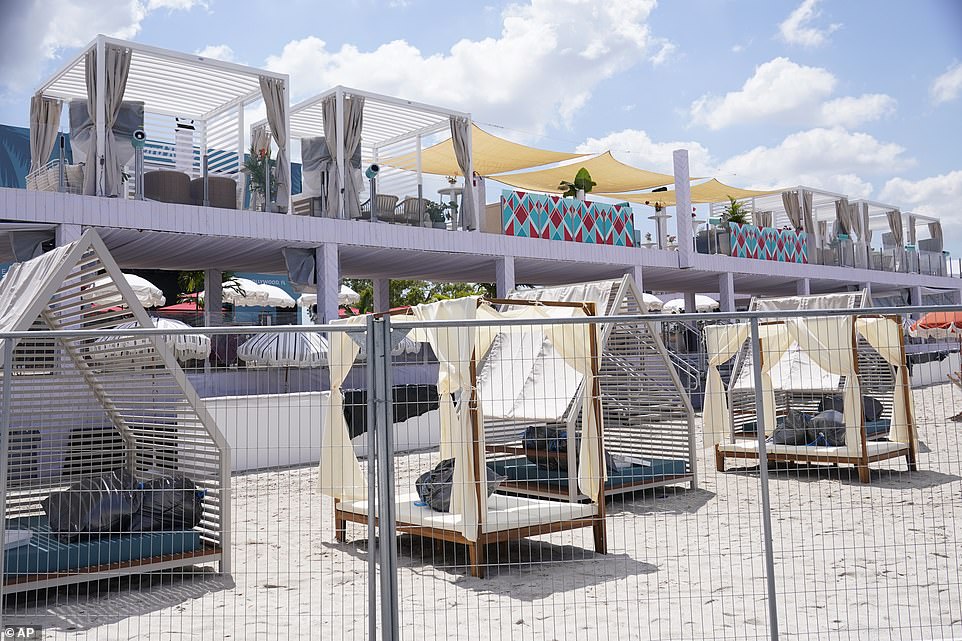 The luxury VIP beach club experience left a lot to be desired, especially in the eyes of die-hard F1 fans 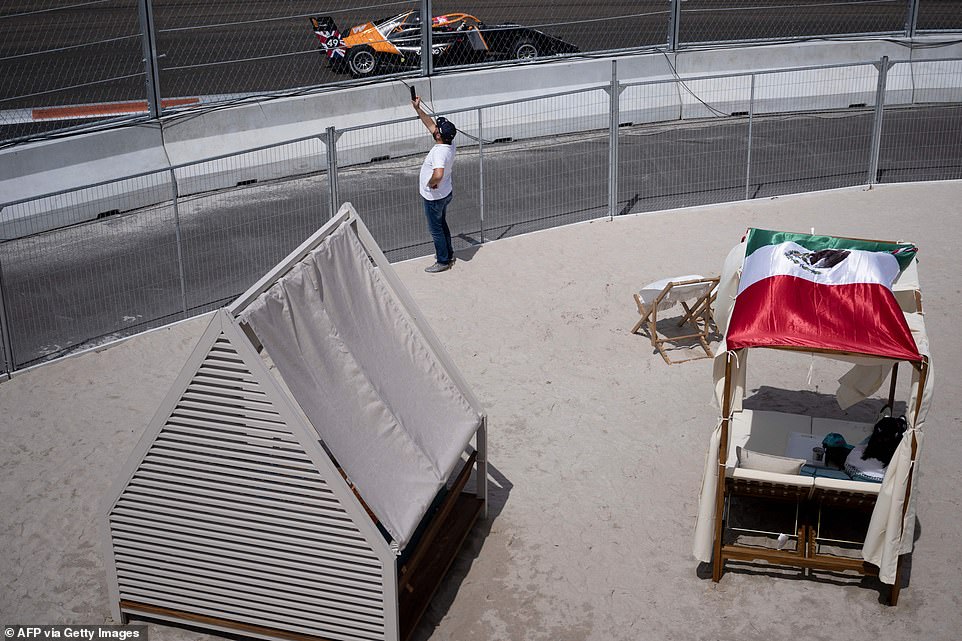 The VIP ‘beach club’ with cabanas was in the center of the track and was billed as one of the most luxurious features of the event but in reality, was a caged in lot with imported sand 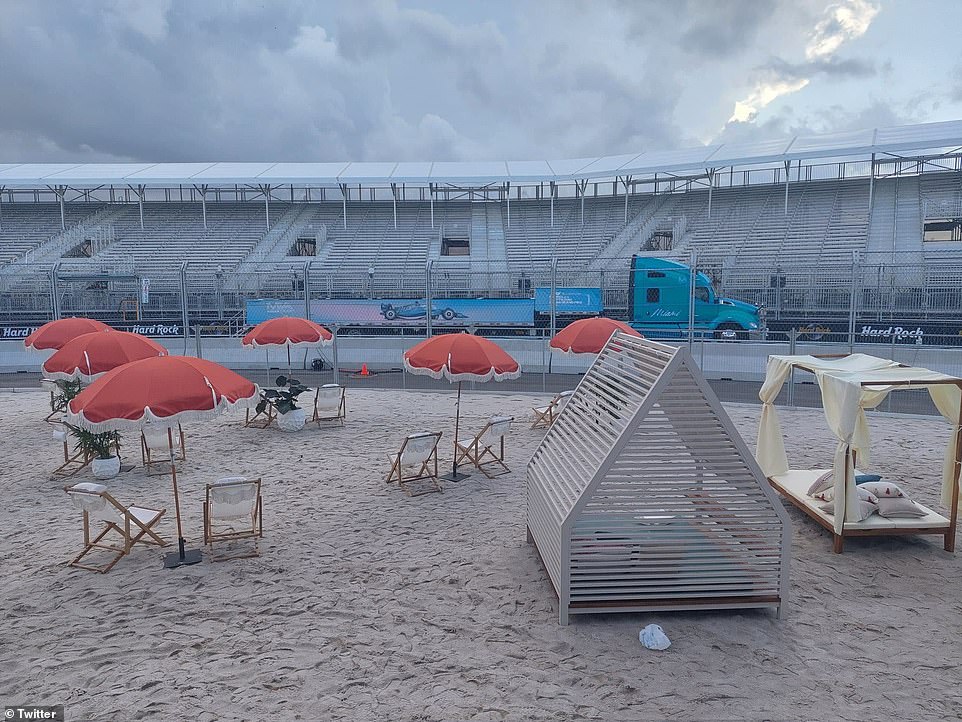 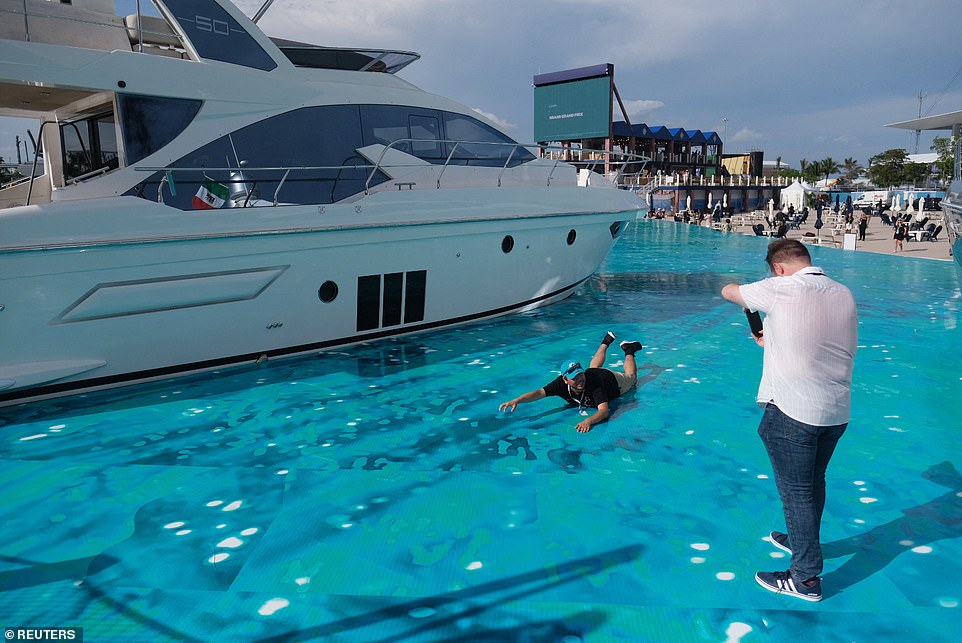 Elsewhere in the stadium was the fake marina, which included painted water and fencing. The point was to show off the boats on display but 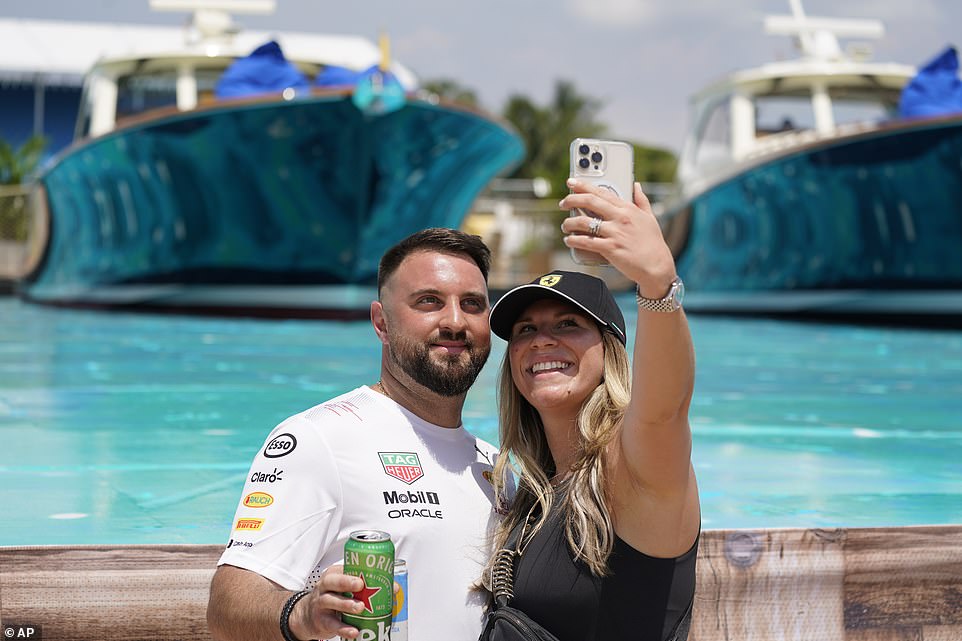 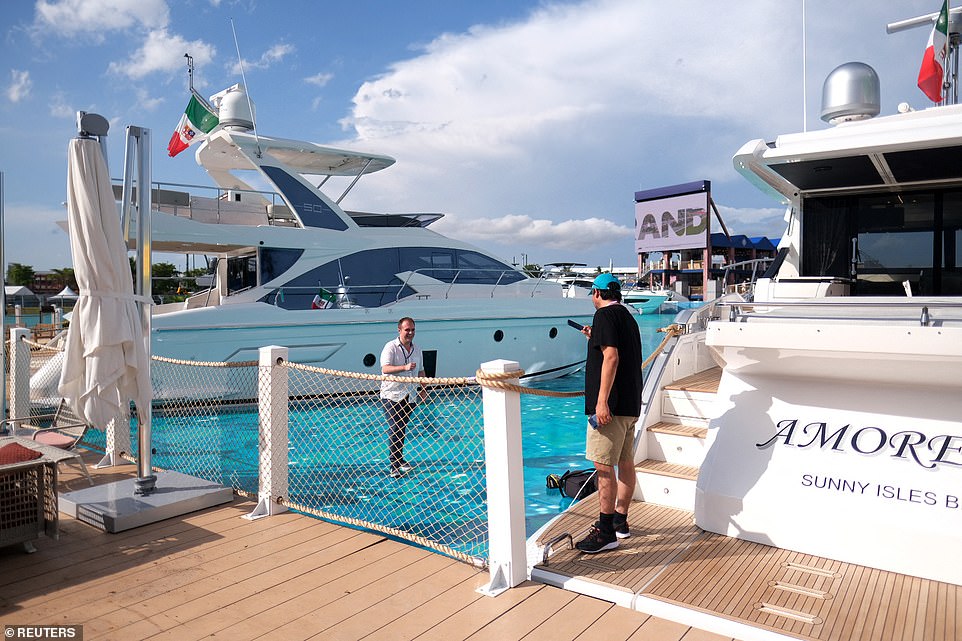 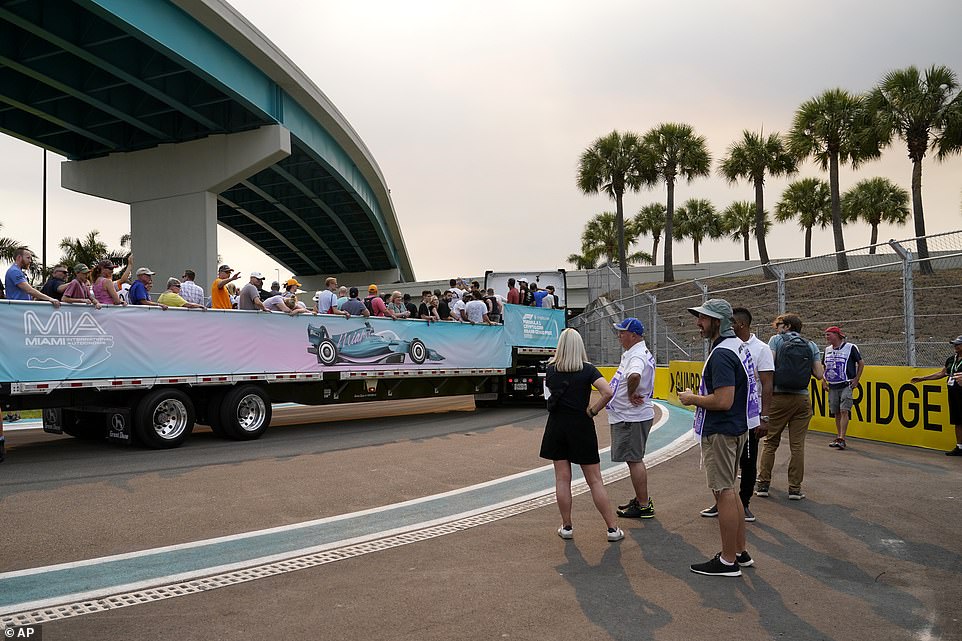 Fans tour the track in advance of the Formula One Miami Grand Prix auto race at Miami International Autodrome, Thursday, May 5, 2022, in Miami Gardens

A general fan buying the most basic ticket for the three days had to pay $1,200 for the pleasure – and that was before ticket gouging sites snapped up the first batch.

By May 1, backrow tickets were being sold on second sale sites for $2,200 each.

With such steep ticket prices, the only people who seemed to soar in with no issues were celebrities. They overwhelmed the event with requests and became more of a focal point than the race itself.

Fans complained of having to walk up to 20 minutes in sweltering temperatures to get to their seats in the stadium, even after paying extra for parking passes that promised to keep them within 10 minutes of the action.

In the center of the track was a VIP beach club where people who had paid extra could watch performances by Post Malone.

Lewis Hamilton, the fan favorite, compared the spectacle to the Super Bowl.

The most ridiculed feature of the event was the fake marina created by painting blue onto the ground in an effort to recreate the ocean.

If organizers hoped it would transport fans to Monaco, their efforts fell far short.

Many joked on social media about the fake water, painted on to show off the boats being marketed.

‘The fake marina around this track might be the stupidest but funniest thing I’ve seen at an F1 track ever. It’s so tacky,’ sad one fan.

‘The marina was insane,’ added another racegoer told DailyMail.com.

She added that she had to walk between 15 and 20 minutes from her designated parking lot – which her group had paid extra for – in sweltering heat.

‘It was hard to find your way around the place, there wasn’t enough shade, and the walk from the parking lots was A LOT longer than they claimed,’ the fan, who declined to be named, said.

Hotel room prices in the city sky-rocketed because of the event, forcing many to fork out upwards of $500-a-night for three-star hotels far from the beach or water.

Others said the fake beach club in the center of the track was filled with posing celebrities who were completely disinterested in the sport. 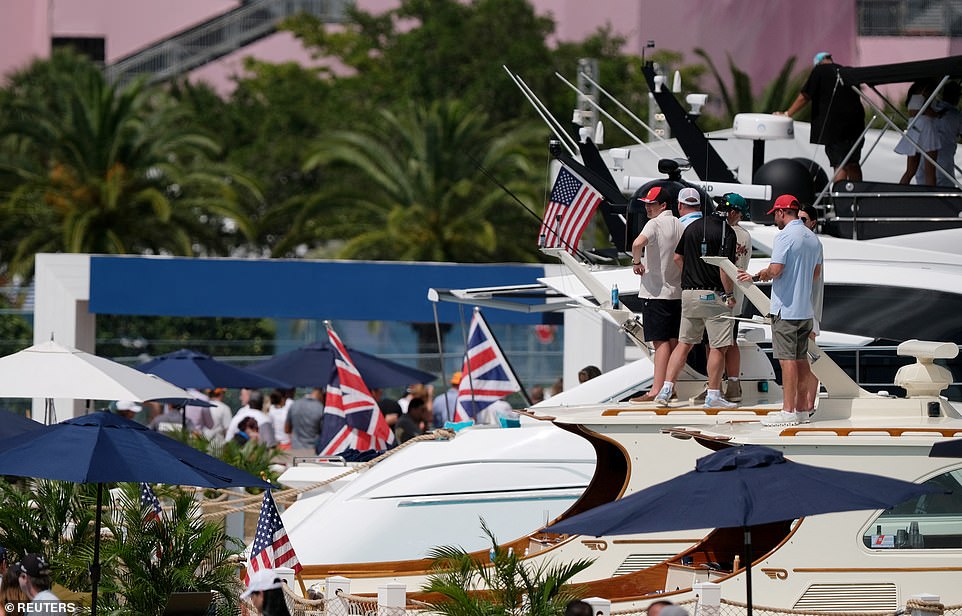 Yacht brokers on their vessels in the fake marina on Sunday, trying to flog the luxury boats to the F1 racegoers 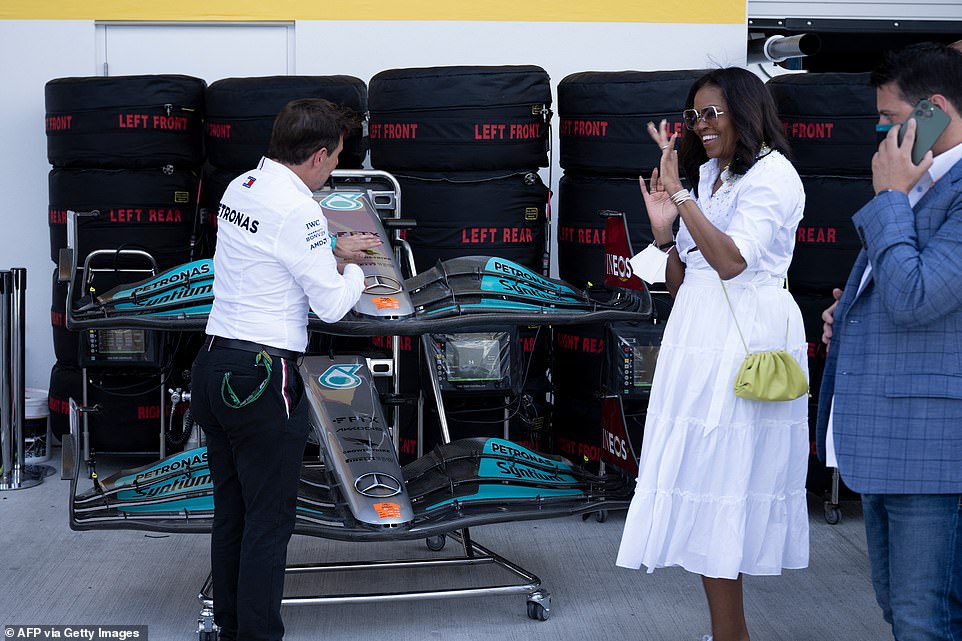 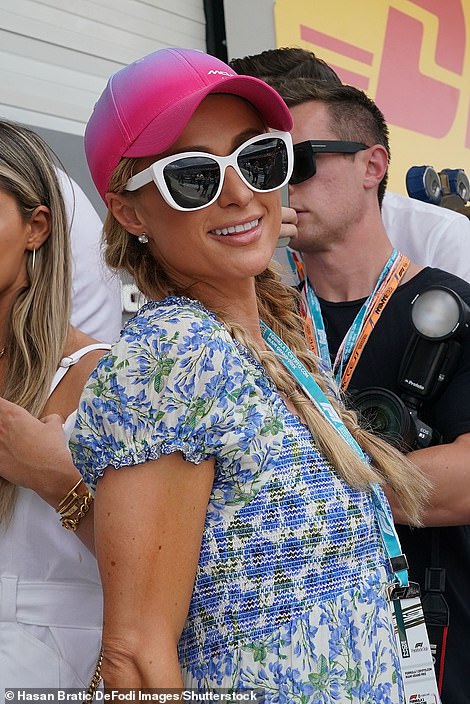 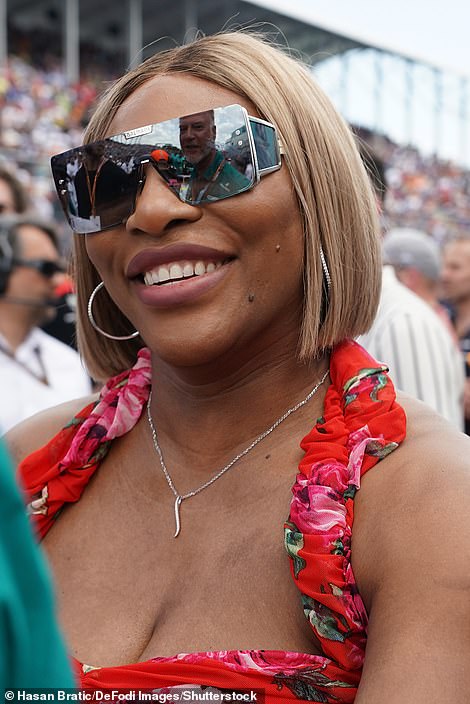 Paris Hilton and Serena Williams were among VIPs at the event over the weekend. They had some of the hottest tickets to the event 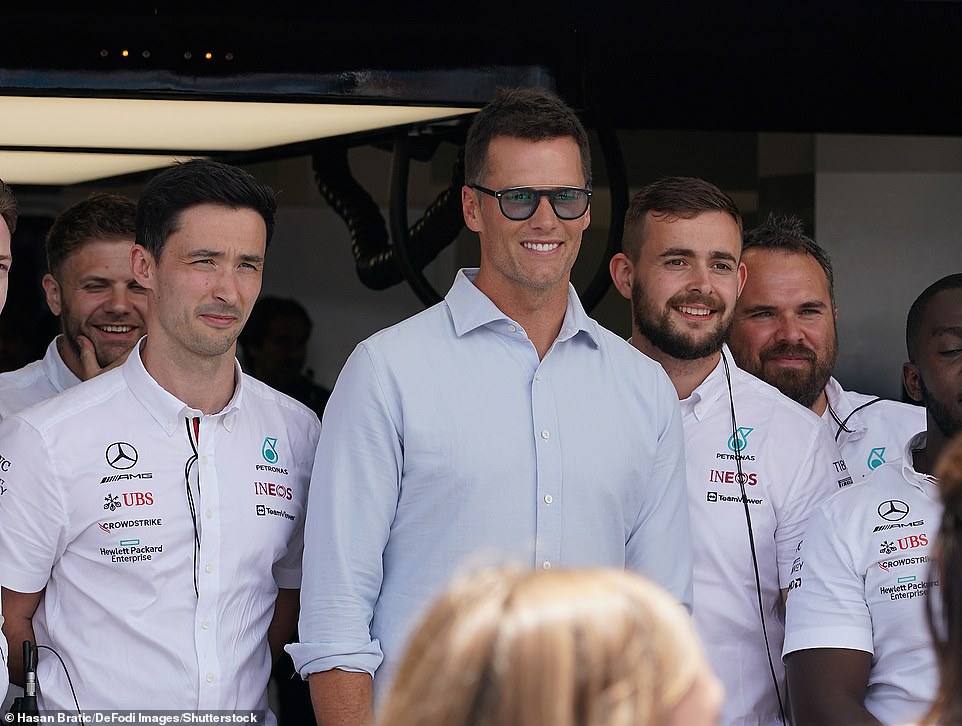 Tom Brady watched the action from the Mercedes garage on Sunday. He was one of the many celebrities in the paddock 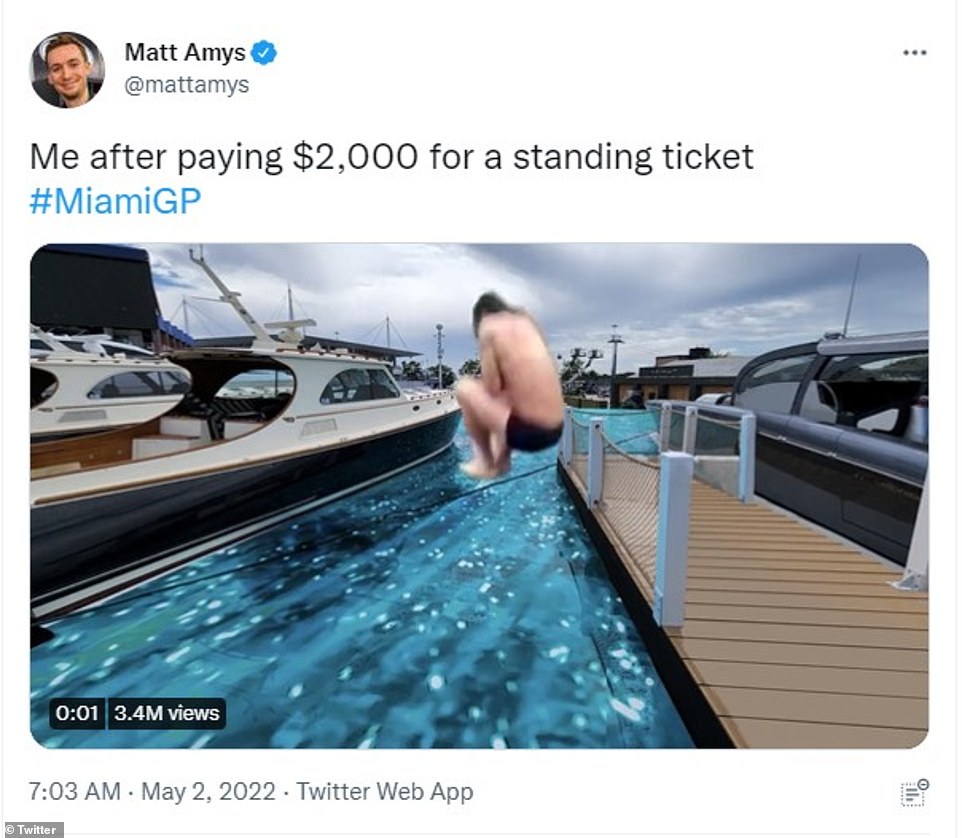 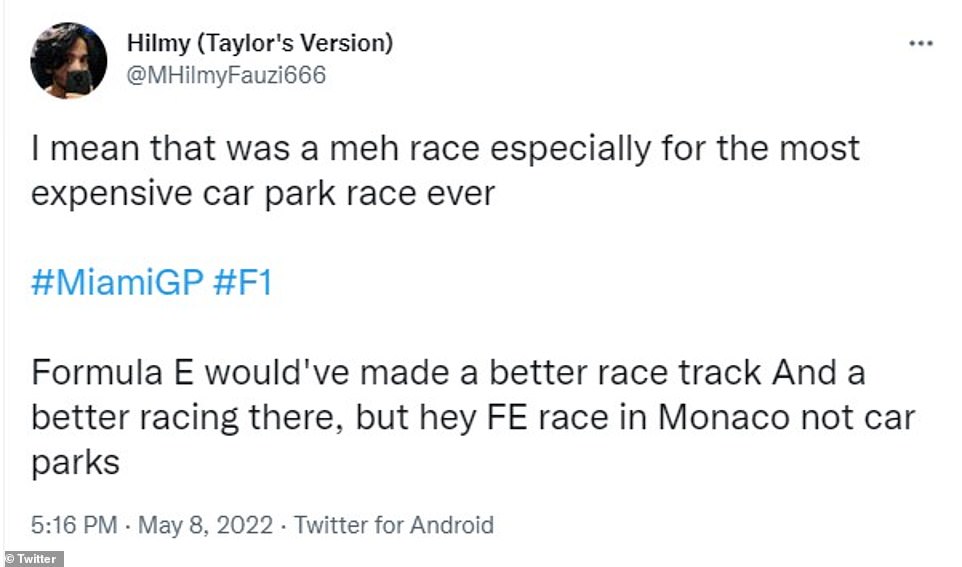 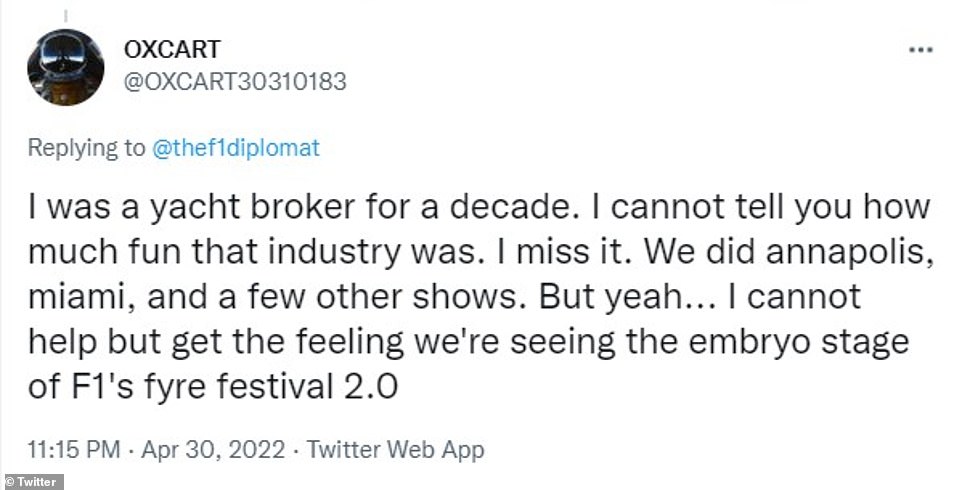 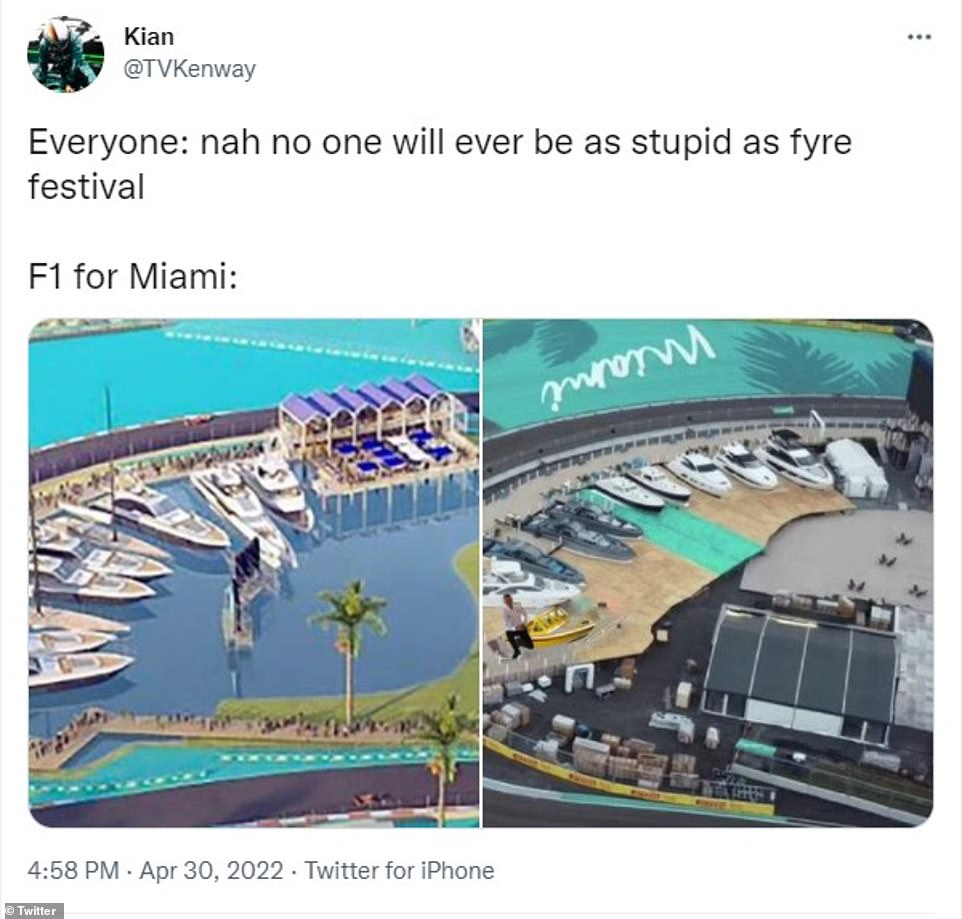 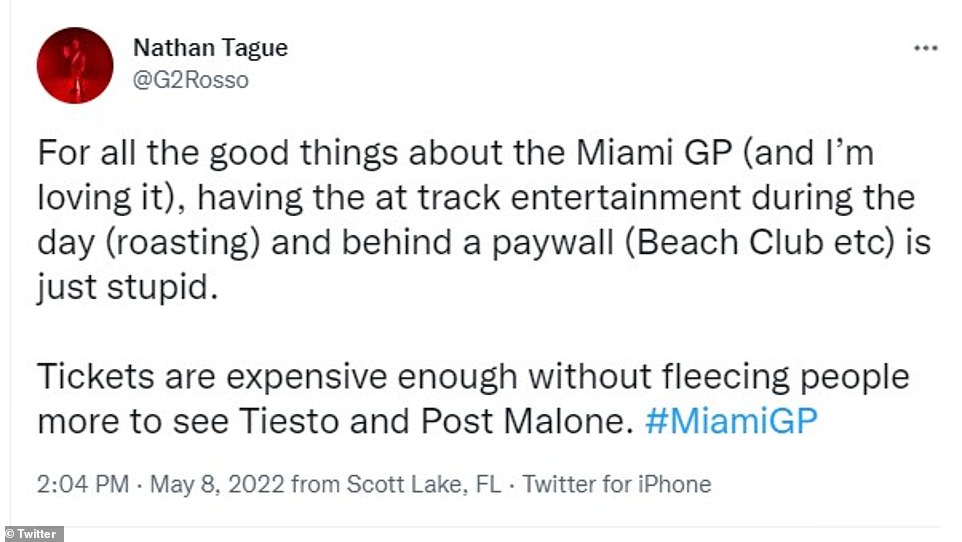 There were pools inside the beach club and performances from the likes of Post Malone.

‘The demands from sponsors and fans has been off the charts, unlike anything I’ve seen in my time in Formula One.

‘I really like where we are in North America as far as Formula One’s popularity,’ said McLaren’s head Zak Brown before the event.

‘Putting on a good first-year event is a challenge to get everything right, given the size and scale and newness to it.

‘But if you look at Austin, 10 years on, they had record attendance last year. Silverstone has been around for 50-plus years and is already a sellout.

‘So, I think putting on a great event, and then having it be sustainable over decades — I don’t say it’s easy to do, but clearly it can be done.

‘Let’s just get it right, put on a good show for the fans, and I think there’s a tremendous amount of runway here,’ he said. 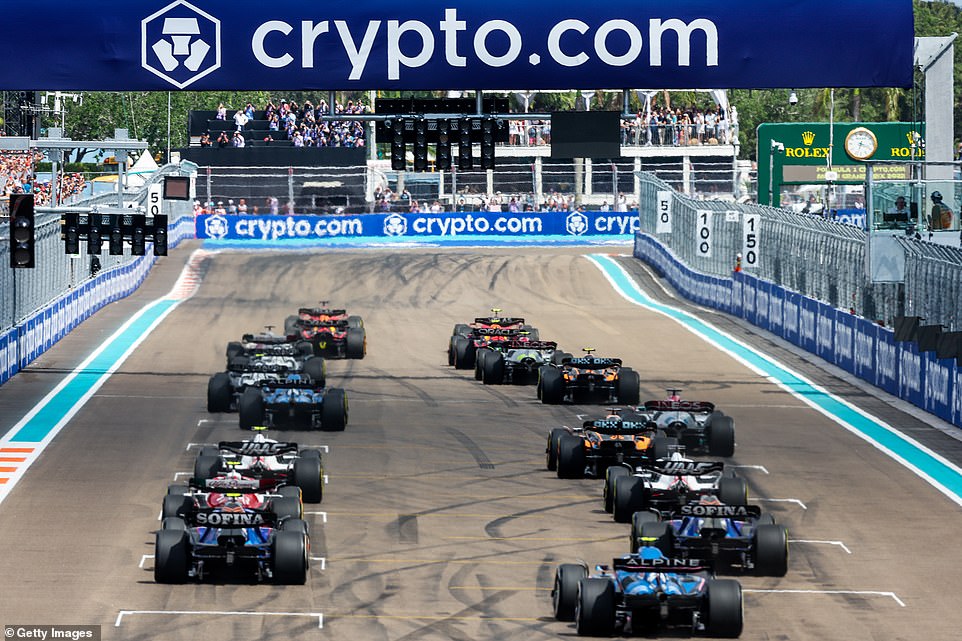 Remember us? F1 drivers set off on the final day of the Grand Prix in Miami on Sunday